ZDENĚK ŠORF (*1965) has made his mark not only on the domestic cultural scene, but also farther from home, including in the United States, where he has spent a longer period of time and enjoys returning. In terms of modern art developments, his painting is most frequently categorised as New Figuration, a style that makes ample use of the grotesque. A broad range of themes are featured in his paintings. The artist often selects subjects from nature – landscapes, compact motifs of natural phenomena such as fruit, trees, landscapes, rocks and animals. He loves large canvas formats, going beyond traditional forms and aiming toward architecture. He often uses letters in his pictures (Lettrism), and savours the aesthetics of Surrealism, as can be seen in his paintings of anthropomorphic animals. Through these he achieves allegoric values, sometimes fairytale-like in nature. He responds critically to the ethical problems of civilisation and aims to emphasise the humanisation of the environment in which we live. 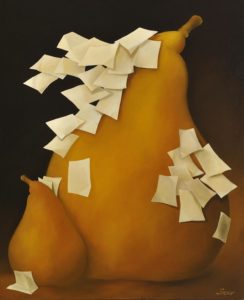