SALVADOR DALÍ (1904 – 1989) demonstrated exceptional talent as a painter already in his childhood. He exhibited his first canvases in 1918 at the Municipal Theatre in Figueres, France and received his first critical acclaim. In 1921 he was accepted at the Real Academia de Bellas Artes de San Fernando in Madrid. He strongly criticised his professors’ skills, was expelled from school for a year and later imprisoned in Girona for political reasons. His first solo exhibition was held at the Dalmau Gallery in Barcelona in 1925. Accompanied by Miró, he met Tzara, surrealists and Paul Eluard in Paris. Dalí’s works are celebrated for their surprising combination of bizarre, dream-like images featuring superb graphic and painterly skills. Over the course of his career, Dalí made over 1,500 paintings. He also illustrated books, designed theatre stage sets and costumes, created a number of drawings and sculptures, and worked on a variety of other projects. 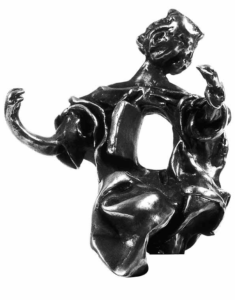