JEAN FAUTRIER (1898 – 1964), a French artist and sculptor, completed his studies at the Royal Academy of Art in 1912. Works he saw at the Tate Gallery, particularly those by J. M. W. Turner, had a profound impact on him. He made his exhibition debut at the Salon d’Automne in 1922, and his first solo exhibition was held at the Galerie Visconti in Paris in 1924. In 1927 he created a series of paintings (still lifes, nudes, landscapes) dominated by black. In 1928 he started to work on a series of etchings for an illustrated edition of Dante’s The Divine Comedy. His later work is abstract, predominantly in small scale and often mixed media on paper. He died in Châtenay-Malabry in 1964. 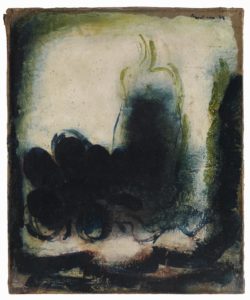