GEORG BASELITZ (*1938) was born Hans-Georg Kern in Deutschbaselitz, a small town in the eastern part of Germany. He has been called the enfant terrible due to his unconventional art in response to the post-war developments that split Germany into the democratic West and socialist East. Baselitz first grew up in eastern Germany and attended the School of Visual Art in East Berlin’s Weissensee. He was expelled from the school in 1957, however, and was later able to escape to West Germany. Here he studied the “new” art movement of Art Informel, Tachisme, Expressionism, conceptual art and Art Brut. His art ceaselessly seeks new motifs and subjects to investigate. He has created a repertoire of expressive landscapes, animals, protagonists, nudes and portraits. In the Seventies Baselitz joined the “New Fauves”, an art group characterised by its use of blazingly bright colours. In the Eighties he returned his focus to provocative sculpture. His monumental wooden object “Model for a Sculpture”, symbolising a heiling figure, appeared at the Venice Biennial and generated much controversy. The artist describes himself as the main mediator between expressive, traditional painting and its current revival. 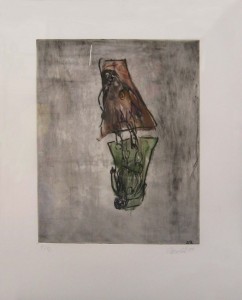