GEORGI STOJANOV (1961-2013) is a well-known Bulgarian artist living in Prague. He spent five years studying at the National Academy of Art in Sofia. His works have been shown in numerous group and solo exhibitions throughout Europe and are represented at the Nitra State Gallery in Slovakia, the National Gallery in Prague, the Museum of Modern Art Monaco and many private collections. His latest watercolours portray archaeological discoveries, signs and symbols that refer to the ancient beginnings of European civilisations. Stojan’s dialogue with history does not conceal his origin and his intimate relationship with Mediterranean civilisations. The watercolour drawings represent perpetual layers of paint, continuously damaged by scrapes, tears and perforations just as archaeological finds are damaged by time. In his work, Stojanov applies his knowledge from several areas of art, including American abstract painting, European Art Informel and post-modern “visual signs”. 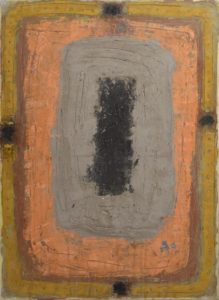