JOSEF WAGNER ml. (*1938) has a degree from the Academy of Industrial Arts in Prague. He worked as a teacher at the Sculpture and Stone–cutting School in Hořice. He participated on architectonic competitions, made several projects in residential, garden and sepulchral architecture. He also worked as a stage designer. He started painting in 1957. The modern world movements of the 60`s influenced him a lot, mainly the lyrical abstraction and Neoexpressionism. The Czech “informel” served as inspiration as well. The seventies meant a turn in his work. He adds sand into the paint, mixes various materials and paints in many layers. He has a close relationship to object art (asphalt paint). Topics he often portrays concern loneliness in civilisation pictures of urban architecture. 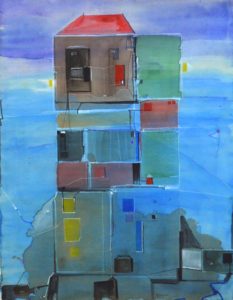