JOAN MIRÓ (1893 – 1983) was born as the son of a goldsmith in Barcelona, Spain. He studied at Escola de la Llotja in Barcelona and took drawing classes at Cercle Artístic de Sant Lluc, where he exhibited his first paintings. He held his first solo exhibition at the gallery of friend and art dealer Josep Dalmau in 1918. In 1927, he moved to Cité des Fusains, where he lived near Ernst, Bonnard, Arp and other artists. Here Miró met André Breton, Paul Eluard and Louis Aragon right at the nascence of Surrealism. By simplifying the structure of his paintings, Miró entered his “dream painting” period. He created a new style of abstraction, describing his dreams from memory. His paintings are filled with the excitement of mysterious cosmic events and are often simplified down to using just black and white, with the background creating the feeling of atmospheric distance. 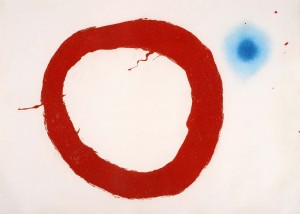