ANDRÉ MASSON (1896 – 1987) was born near Senlis, Picardy, but grew up in Belgium. He first studied art in Brussels, later in Paris. In his early works he had a fondness for Cubism and automation. Initially his works appear to be simply decorative, but upon closer look one can see deeper layers of Surrealism. Masson’s work also includes theatre sets and lithography. To be inspired he often worked while under the influence of drugs; he did not sleep and did not eat. He believed this experience would free his mind of rational control and he would then be able to tap into his subconscious. Masson lived in New Preston, Connecticut, where his work inspired emerging American abstract expressionists. He primarily painted abstract compositions inspired from Afro-American and Indian myths. 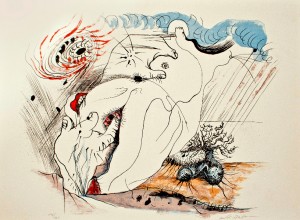 From the cycle Dessin Érotique